Getting Started With Flux And React

Who is This Blog For?

In this blog, we are going to give an introduction to React with Flux by using a sample project — creating a “To Do” list. The steps that we’ll go into will require a basic understanding of Javascript and web concepts. The same code that will we be using can be found here: https://github.com/mahesh-singh/justdo

Before we get into the code, we need some background information of Flux and React, which are both independent technologies.

Flux is a Javascript architecture or pattern for UI which runs on a unidirectional data flow and has a centralized dispatcher. It is useful when your project has dynamic data and you need to keep the data updated in an effective manner. It was created by Facebook, and complements React as view. This model is used to ease maintenance. It has three primary components: Views, Stores, and Dispatcher. As the MVC application grows, we find many numbers of views as models, which are all talking to each other, making it difficult to manage and debug.

Action: Action describes user interaction that occurred in a component, such as a user clicking a button.
Dispatcher: Dispatcher methods are invoked by an action component. This emits an event with data that needs to go to a store, which is a singleton registry.
Store: The store listens to certain events from the dispatcher. When it listens to an event from the dispatcher, it will then modify its internal data and emit a different event for views.
View: Views are typically a react component. Views get data from the store and set up a listener to refresh itself when the store emits any changed events.

React is a lightweight and fast component library created and used by Facebook. It’s a view layer that can help you to create pluggable components. Since it just focuses on the view layer, it’s easy to learn and use with other Javascript frameworks.

In other component libraries, like AngularJS, we use JavaScript inside HTML with the help of directives. React has the opposite approach: it uses HTML inside JavaScript. At first glance, it may seem ugly or you may find the separation to be concerning, but as you start to use it you will find it to be worthwhile.

In React we use “JSX” to create HTML. “JSX” is optional, but it gives you more readability and is easy to maintain and debug, as well as easy for designers to change. However, browsers don’t understand “JSX,” so it’s converted into plain JS when rendered on a browser.

Updating DOM is an expensive task, which is why React created an abstraction above DOM called virtual DOM. React uses virtual DOM concepts and compares Old DOM with new look of DOM stored in memory when any value changes. It also updates the changed part only in the place where the change takes place. instead of rewriting the entire DOM again, which is why React is notably faster that any other component library. We do not need to make any code changes for React to use this feature automatically. Additionally, virtual DOM allows rendering on a server where no DOM exists at all, and provides flexibility.

React also supports Isomorphic rendering that makes it search engine friendly and gives a better overall user experience. In another component library that loads the complete DOM on client and only gets data from API, a user will only see a loading screen or a blank screen once the data comes from the server and the client Javascript is rendering. A different component library also doesn’t give us DOM from the server, which makes it hard to a search engine to index it.

React does not support two-way binding, unlike other component libraries, like AngulaJS and Knockout, that use two-way binding. Two-way binding is useful but it has the risk of being unpredictable. When the UI is changed in two-way binding, it triggers a corresponding model change, which will trigger another model or other UI changes. This integration becomes hard to predict for large applications and is difficult to debug.

There are several reasons to use React as a component library:

Most of the technologies we are setting up here are not required to work with React and Flux, but will give you a better and easier work environment. It will also be helpful to get rapid feedback when you are building your project.

To install NPM, we need to install “node.js” installer because NPM is a part of a node.

To open the project, you can use any text editor with which you are familiar. We are using Sublime text. When you open the project, you will find the structure shown in below image. The “main.js” file inside the “Static > Scripts > JS” folder is the entry point of code. At the top of the main.js file are two “require” syntax which will use the React component. In this code, the “JustDoApp” component is rendered. 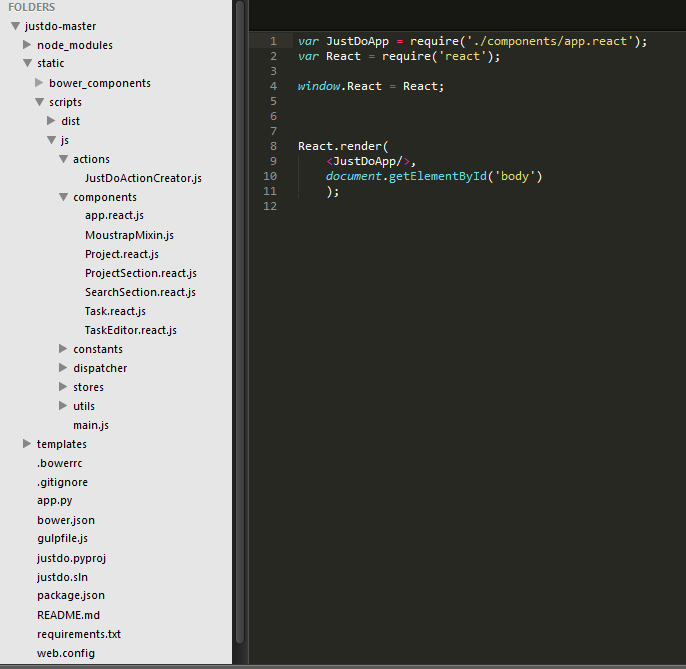 In the actions folder, there is the “JustDoActionCreator.js” file, which defines actions like “receiveAll” and “addTask.”

The Dispatcher is defined in the “JustDoAppDispatcher.js” file, and requires Flux.

The Store is defined in the “ProjectStore.js” file, which defines all of the data fetching points, as well as one switch case to track actions. This emits a change event when the data is updated, as well as the React component listening to this store update itself.

There also a Gulp file, named “gulpfile.js,” which is used to define a set of classes. Here Browserify is tasked to do two activities: the first is to bundle the CSS and Javascript files, and the second one is to convert the activity from “JSX” into plain Javascript code. A watch is added here to rerun this process when any Javascript files change.

This is just an overview of React with Flux, which also explains why this is quickly getting popular. We have provided steps to set up the development environment for Javascript-based (with or without React) web development. We have also given a code walk-through, which should help you understand how things get placed and how they work in React with Flux.