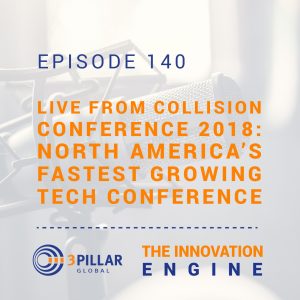 We just concluded the second and last – for now – stop of The Innovation Engine’s Spring 2018 tour, from the floor of Collision in New Orleans. Collision is North America’s fastest growing tech conference and contains 16 different tracks, including SaaS Monster, Talk Robot, FullStk, and Growth Summit.

This year’s conference brought together more than 25,000 business leaders from more than 5,600 companies in 120 countries to watch talks and learn how tech is impacting their lives, companies, and industries. Over the course of this episode, we’ll be talking with tech and product leaders from an interesting cross-section of companies, including Dropbox, NASA, and Haymarket Consumer Media, among others.

You can tune in to the full episode below.

Guests we chat with on this episode include:

Since 2014, 3Pillar has published The Innovation Engine, a podcast that sees a wide range of innovation experts come on to discuss topics that include technology, leadership, and company culture. You can download and subscribe to The Innovation Engine on iTunes. You can also tune in via the podcast’s home on Stitcher Radio or SoundCloud to listen online, via Android or iOS, or on any device supporting a mobile browser.