Soft Skills in Technical Jobs & The Future of Programming Languages 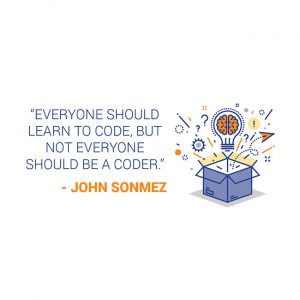 John Sonmez joins us on this episode of The Innovation Engine to discuss whether coding is a skill everyone should learn, how to lead a team of developers when you find yourself in a leadership position, and what the programming language (or languages) of the future will be.

John is the Founder of Simple Programmer, a website where he tirelessly pursues his vision of transforming complex issues into simple solutions, and the author of newly-released The Complete Software Developer’s Career Guide. He also helps software engineers, programmers, and other technical professionals boost their careers and live more fulfilled lives.

John is launching The Complete Software Developer’s Career Guide at a special price of $0.99 for the Kindle version on launch day, July 19th, 2017. Go to SimpleProgrammer.com/careerguide to get something special in addition to the $0.99 price.

Interested in hearing more? Tune in to the full episode via the SoundCloud embed below.

Should everyone learn to code in the digital era?

The programming language(s) of the future:

About The Innovation Engine Podcast

Since 2014, 3Pillar has published The Innovation Engine, a podcast that sees a wide range of innovation experts come on to discuss topics that include technology, leadership, and company culture. You can download and subscribe to The Innovation Engine on iTunes or tune in via the podcast’s home on Stitcher Radio or SoundCloud to listen online, via Android or iOS, or on any device supporting a mobile browser. You can also download the podcast’s dedicated iOS app from the iTunes App Store.