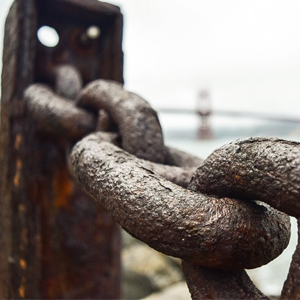 The introduction of cryptocurrencies, specifically Bitcoin, has brought the concept of blockchain technology into the mainstream. A blockchain is a continuously growing distributed database that protects against tampering and revision of data.

The industry has already seen the power of a distributed system with Git Version control; blockchain builds on the same Merkle tree approach, but also adds consensus, which specifies rules on how data can be added and verified. Transactions are added in blocks and must follow the exact order in which they happened (thus the name blockchain).

Bitcoin uses blockchain to maintain its public ledger of every single transaction ever made with Bitcoin. This Merkle tree approach allows for a greater hashing mechanism to provide efficient and secure verification of large amounts of data. This information is then used by Bitcoin to enforce their transactional checks.

Though Bitcoin did not manage to completely disrupt the world market, the technology behind it has the potential to do so. Currently, blockchain is being used to solve problems other than cryptocurrencies–Nasdaq OMX is testing the technology for stock trading, while e-retail giant Overstock has released its digital bonds using blockchain.

Blockchain is not just limited to the financial system; instead, it is a great solution for almost any platform or product that requires trust, such as keyless automobile entry authentication. Additionally, IBM and Samsung recently revealed a proof of concept that use blockchain as the backbone of the Internet of Things.

Blockchain also has the potential to improve upon systems already in use throughout society. A report done by the state of Virginia revealed that most voting machines put in practice between 2002 and 2014 used the passwords ‘abcde’ and ‘admin,’ meaning they could have easily been hacked from the parking lots outside of the polling stations. By implementing a blockchain-based voting system, elections can become much safer.

The idea behind blockchain, in short, is to be able to establish and verify trust without the need of a centralized system. Instead, this power would be given to a decentralized network, making it not only more secure but also both more efficient and faster to scale. A decentralised marketplace can replace market leaders like Ebay, Amazon, and Uber. This would mean that trust, rules, identity, reputation, and payment choices would be embedded at the user level and participants arrive already trusted and decentrally acknowledged.

Blockchain technology offers a lot of potentially disruptive power, and companies are already in the race for different product offerings. As the industry continues to evolve, blockchain stands out as the best investment for future returns.

If you are interested in learning more about blockchain technology, you can see the blockchain canvas referenced in the comments section below as well as read about and watch a presentation Adi Chikara gave at the Ethereum DEVCON1 conference in London here.

Adi Chikara is a Client Partner for Media & Entertainment industry at 3Pillar Global, helping companies compete in the digital economy. He works with 3Pillar team members throughout the world to build revenue-impacting digital products.

Prior to joining 3Pillar, Adi held key research and consulting roles in European Union-funded researches. In the private sector, Adi has served in various product & technical roles at Reuters and multiple Startups. When he is free from creating world-changing products you can find him at the local motor race tracks breaking lap records.

One Response to “Introduction to Blockchain Technology”