Innovation in the Wild at the 2014 NAB Show

For this week’s episode of The Innovation Engine, we busted out of the studio and took our act to Las Vegas for the 2014 NAB Show. The NAB Show is one of the largest annual gatherings of media and entertainment professionals in the world, with nearly 100,000 attendees.

Hundreds if not thousands of companies had their most forward-looking products on display, so I walked the floor in all 3 halls of the Las Vegas Convention Center to find what looked to me to be the most potentially disruptive products in the media and entertainment space. Here’s a quick recap of who all we had the pleasure of speaking with on this week’s podcast, along with a short description of the products they were demoing at the show.

Bernie Rayno from AccuWeather on StoryTeller and their HD Drones 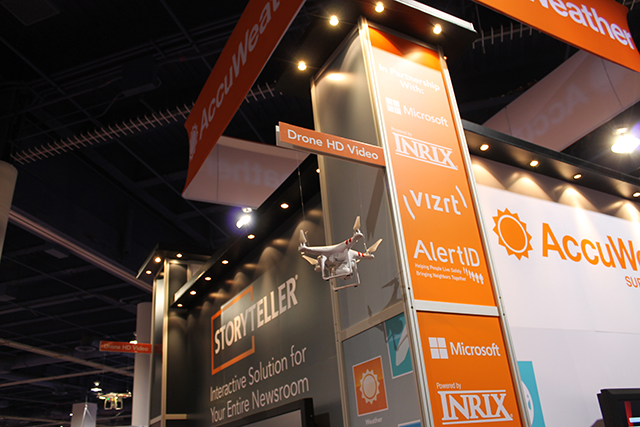 Bernie Rayno and Stef Davis were hard to miss at the AccuWeather booth, where they demoed a tool for news companies called the StoryTeller app. StoryTeller is an interactive touch solution that provides newsrooms with customized access to information on news, sports, weather, travel, finance, crime, and more. The app is ideal for networks looking to bring interactive features and up-to-the-minute information to their broadcasts. From the StoryTeller app, licensees can also get access to live video from HD Drones, several of which were on display at the NAB Show. 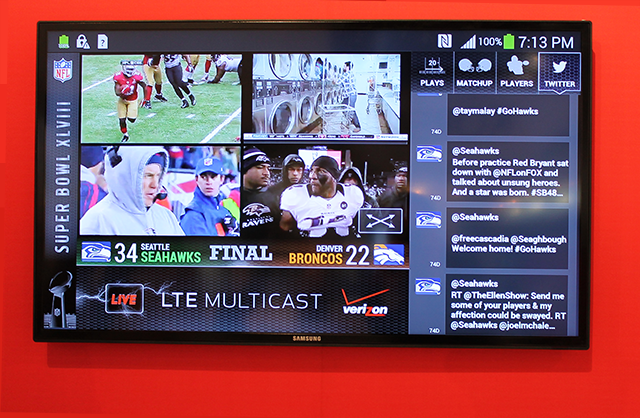 Our next stop was the Verizon booth, where we spoke with Jack Arky about Verizon’s LTE Multicast. LTE Multicast is a technology that will allow for a single broadcast channel to be accessed simultaneously by thousands of mobile devices. Multiple video streams at a time can be displayed, along with a sidebar for statistics, social messages, or other relevant streams of data that may be pertinent to a viewer. What’s not to love about being able to see the crazy eyes from Ray Lewis alongside the evil hooded genius that is Bill Belichick?

The idea behind LTE Multicast is to increase the quality of mobile video viewing by allowing thousands of people to tune in via one Multicast LTE feed rather than all trying to stream it separately to their own devices. The use case on display at the NAB Show was originally unveiled by Verizon during this year’s Super Bowl week, and it sounds like you can expect to see this kind of content coming to an NFL stadium near you within the next year or 2. 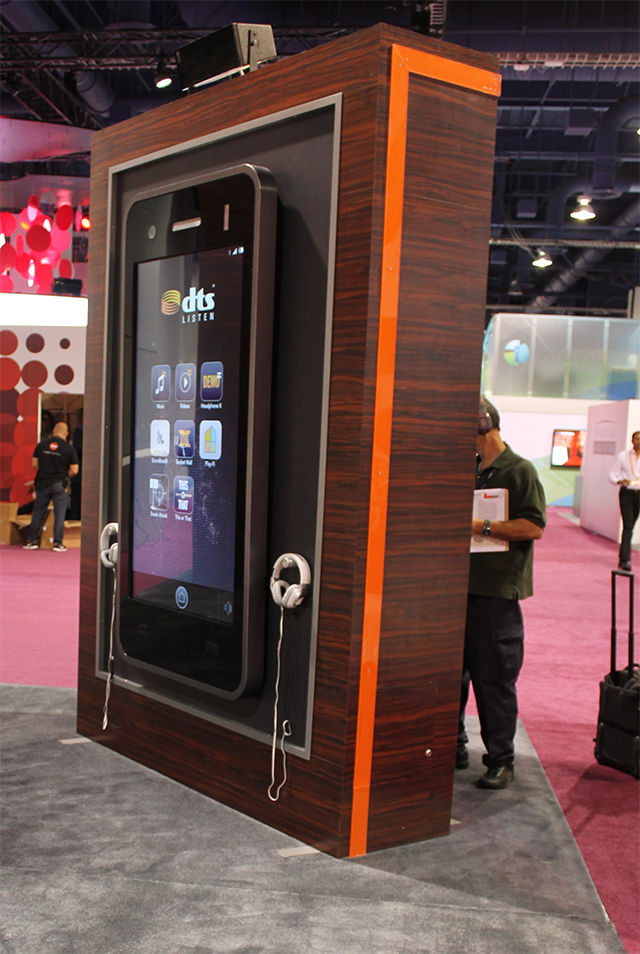 DTS is a company that has traditionally done a lot of cutting-edge work in the cinema and home theater surround sound space. At this year’s NAB Show, they gave a powerful demo of their newly launched DTS Headphone: X technology, which allows surround sound to be played on any pair of headphones via mobile devices. Geir Skaaden of DTS spoke with us about a recent study that was unveiled at the Mobile World Congress earlier this year that showed the impact of audio on brain activity while consumers are watching video. Among the metrics the study found higher-quality audio would improve are memory, emotional intensity, likability, attention, and engagement. 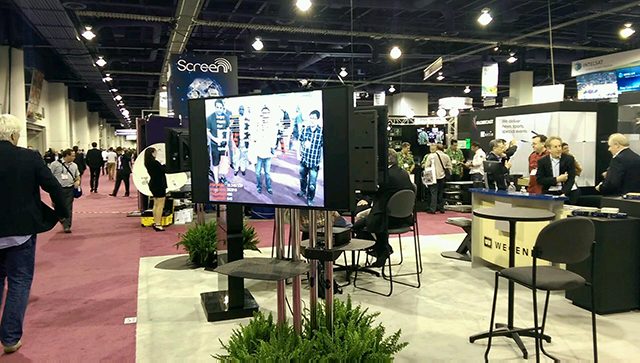 One of the most eye-catching exhibits at this year’s show was from Wegener, where they were demoing a new facial recognition product for digital signage that can accurately decipher the demographic information of a person in front of the screen, such as their age and gender, and even predict whether they are happy or angry based on a sentiment analysis feature. Ken Leffingwell from Wegener was upbeat about the utility of this product for advertisers who could use it to know specifically how many people from specific demographics watched an ad and whether they reacted positively or negatively to the ads. 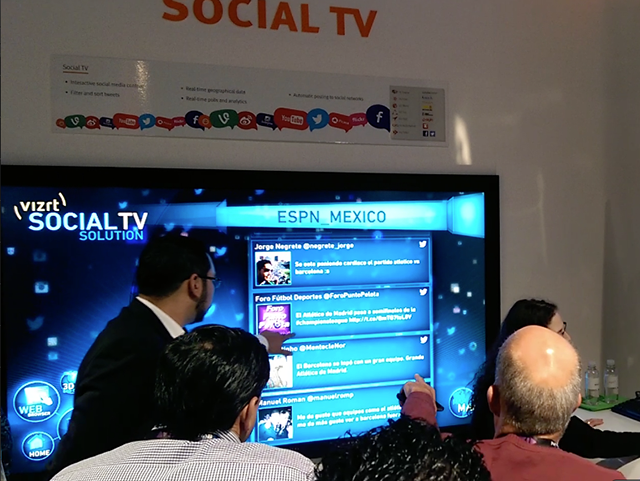 Our next stop was the Vizrt booth, where we got a taste of a truly innovative Social TV solution, which is used by major American networks and international networks like Univision. Chris Black spoke with us about how Vizrt’s Social TV offering allows networks to review all the social media that’s coming in on a particular topic and then use it to visualize stories. By integrating this solution, networks can analyze not just what users are saying in response to their news stories but also what their mood is when they say it. We also touched on 4K and the advantages of shooting and watching video broadcast in 4K.

Another product that I thought showed the future of where entertainment is going was GiganetTV. Gary Nerlinger, Founder of GiganetTV, spoke to us about their multi-screen technology, which allows viewers to pull in content from multiple channels and sources and display it all at once on the same screen. It is, as Gary put it, “The ultimate optimized and personalized digital experience.” Giganet’s multi-tasking Social TV experience allows any combination of up to 30 data streams to be displayed on any 1 screen on any device. He also shared widespread application areas of this product, namely law enforcement agencies, military hospitals, educational institutions, just to name a few. 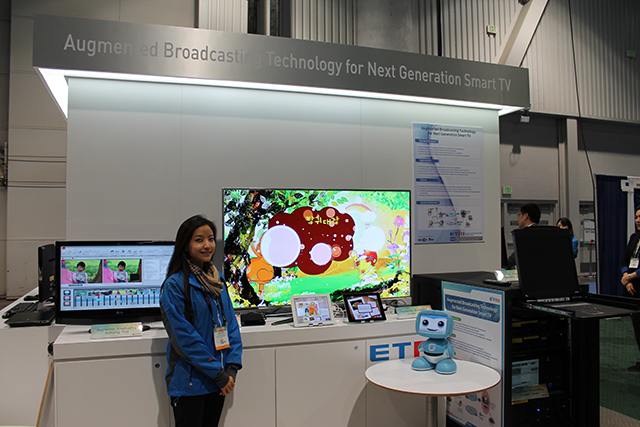 Taking Augmented Reality technology to another level were the pioneers at the Electronics and Telecommnications Research Institute (ETRI) booth, where the Korean company displayed a prototype of what they are calling an Augmented Broadcasting tool that uses both augmented reality and a toy robot called Kibot to drive interactive children’s content. Their technology allows children to do things like play instruments on a tablet and to have their actions incorporated into a TV show. It also allows users to broadcast their own custom messages over top of traditional broadcast programing.

Many thanks to everyone who gave their time to be interviewed, and please tune in to the podcast via the Stitcher Radio embed below to hear more about some of the most exciting products out there at this year’s NAB Show!

If you’re interested in listening to previous episodes, you can subscribe to the Innovation Engine on iTunes or tune in to the podcast’s home on Stitcher Radio to listen from any device supporting a mobile browser.