The Four Lenses of Innovation, with Rowan Gibson 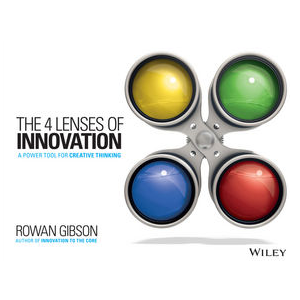 On this week’s episode of “The Innovation Engine” podcast, we look at the four lenses of innovation – what the four lenses are and how they can be used to drive corporate innovation, how they can be employed to emulate the mind of the innovator, and what we can all learn about innovation from the greatest minds of the Renaissance. This week’s episode is the first in a 2-part interview, the second half of which will air next week.

Rowan Gibson, a world-renowned innovation expert who has served as a keynote speaker on the subject of innovation in 60 countries around the world, joins us to talk about these topics and more. Rowan is an internationally bestselling author whose just published book is titled The Four Lenses of Innovation: A Power Tool for Creative Thinking.

Rowan has previously written two major books on corporate innovation and business strategy: Innovation to the Core and Rethinking the Future, both of which are published today in over 20 languages. Rowan is also the co-founder of Innovation Excellence.com, the most popular innovation-themed website in the world, built on an international group of over 22,000 members from 175 countries. And if you’ve been a long-time listener of this podcast, you’ll remember him from the lucky 13th episode of “The Innovation Engine,” when he talked about Building a Blueprint for Innovation.

Highlights from this podcast episode with Rowan Gibson include:

One Response to “The Four Lenses of Innovation, with Rowan Gibson”