Home / Insights / Where Are the Female Leaders in Tech (& How Can We Attract More)? – with Dean Carla Brodley

Where Are the Female Leaders in Tech (& How Can We Attract More)? – with Dean Carla Brodley 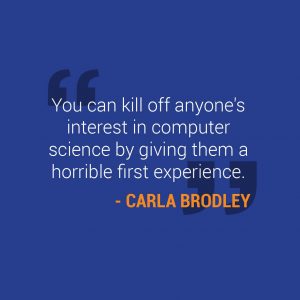 On this episode of The Innovation Engine, we examine the dearth of female leaders in technology and look at ways we can mentor and encourage more female computer scientists. Among the topics we discuss are a new curriculum at Northeastern University, how that curriculum is evening the demographic playing field, and whether there really is a difference between women and men when it comes to their interest in Computer Science.

Our guest is Carla Brodley, Dean of the College of Computer and Information Science at Northeastern University. Dean Brodley’s interdisciplinary machine learning research led to advances not only in computer and information science, but also remote sensing, neuroscience, digital libraries, astrophysics, chemistry, evidence-based medicine, and predictive medicine. She’s currently serving on the board of directors of the Computing Research Association (CRA), the Executive Committee of the Northeast Big Data Hub, and as a member-at-large of the section on information, computing, and communication of the American Association for the Advancement of Science (AAAS).

Why are there fewer women than men in Computer Science?

“People pre-select out of careers really early, and often it comes from stereotype threats or from what’s in the media – and certainly the perception of what a computer scientist is in film and TV is actually pretty far from the truth.”

How we can encourage women to try Computer Science (and one way we shouldn’t):

How do we encourage women to join #ComputerScience? Hear from @Northeastern CS Dean Carla Broadley. Click To Tweet

Jennifer Ives is the SVP of 3Pillar’s Technology industry team. Jennifer is a seasoned business leader who has 20+ years of experience working with technology companies to help fuel strategic growth. Over the course of her career, she has worked with technology companies that range in size from startups to Fortune 500 companies. She oversees a team at 3Pillar that works with a diverse portfolio of clients and includes software, security, and venture-backed startup companies.