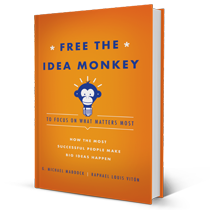 Mike Maddock joins us for the 8th installment of “The Innovation Engine” podcast to talk about business model innovation, something he knows a thing or 2 about as Founder and CEO of Maddock Douglas. Maddock Douglas is a Chicago-based Innovation Agency that has helped more than 25% of the Fortune 100 invent, brand, and launch new products, services, and business models, leading to billions of dollars in revenue.

Mike is the author of, most recently, Free the Idea Monkey: How the Most Successful People Make Big Ideas Happen. He is a regular columnist on Forbes.com, where his articles on innovation, business, and leadership routinely rack up thousands of hits.

One stat that Mike mentions early in the podcast that speaks to the importance of companies applying innovative ideas to evolve or expand their existing business model is this: almost 50% – 47.6% to be exact – of the companies that were on the Fortune 500 in 1999 were no longer on it in 2009. Two hundred and thirty eight of those companies had been replaced only ten years later.
Among the topics we cover on this episode of “The Innovation Engine” podcast are:

Sound like something that might be up your alley? Strap on those headphones on and tune in to episode #8 of “The Innovation Engine” podcast via the Stitcher Radio embed below.

You can also subscribe to and download the Innovation Engine on iTunes to listen on your iPhone, iPad, or iPod. or you can listen online via Stitcher Radio or through the Stitcher Radio iPhone or Android apps.

If you’re interested in finding out more about Mike Maddock, you can follow him on Twitter at @theideamonkey, his company is @MaddockDouglas, and you can read the first chapter of his book for free on the Free the Idea Monkey website.