Today Software Magazine: The Making of the Android App

The arrival of Today Software Magazine back in March 2012 infused life into the IT community in Romania. It provided voice to the many talented IT and software development professionals who were looking for a common platform to showcase their expertise, share best practices, and find solutions to various problems impacting the industry.

Today Software Magazine has grown in strength from its first issue of four articles to the latest issue, #17, which is comprised of twelve contributions on topics like agile continuous improvement, Scrumban (a combination of Scrum and Kanban), and the real-time web.

The Beginning of the Process

After hearing of the potential opportunity for development of an Android app for Today Software Magazine from Dan Suciu (Director Engineering – Cluj), the Android competency center team in India led by Anjula Pahuja and Vineet Aggarwal started working on the scope of the Android version. A team of 3 people (Ravindra Prajapati, Khushboo Kaur, and Priyanka Singh) was created to deliver the project. 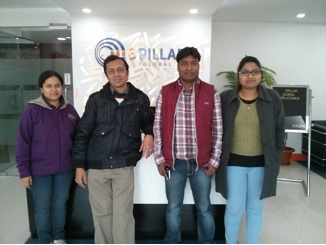 The 3Pillar team of Software Engineers followed our usual Adaptive Product Lifecycle Methodology (Adaptive PLM) and created 3 sprints of 2 Weeks each. The role of the Sr. Technical Lead (Vineet Aggarwal) was instrumental in adhering to the set timelines identified for each of these sprints, helping the team technically, and providing status reports on progress to both the client and management. As per our Adaptive PLM approach, each sprint has a specific “theme,” and the team showcased a demo to the client at the end of each sprint to get their input and further improve the delivery in subsequent builds.

Project progress was tracked closely using JIRA, and all the respective tasks were created as user stories and assigned to the respective developer in JIRA to keep track of the development time and completion date. GitHub was selected as the code repository tool, and a development branch was created for developers at the start of Sprint 1. To avoid any conflicts, the master branch was merged with the development branch at the end of each sprint and tagged with subsequent sprint versions following code review.

Based on discussions with the client, the team was told to complement the iPhone app’s design and features. We were also encouraged to come up with our own suggestions. Here is the set of features that were proposed and implemented:

The application starts with a splash screen and provides options to the user to make their language selection between English and Romanian. On clicking the language button, the app starts retrieving the image of the latest issue and articles from the TSM web server. It then downloads the data saved in internal memory and a SQLite database.

After downloading the information pertaining to the latest issue, the app launches the home screen and shows the TSM home screen with all the downloaded issues and articles. On clicking the action bar menu icon, a user can open the left navigation drawer that contains list of issues downloaded from server. In the right panel screen it will show the list of articles from the selected issue.

Clicking on any article will open the TSM article viewing screen, where a user can read the full article and details of author. On clicking the share icon, the app launches a pop-up menu with options to share articles via Facebook, Twitter, or email. The language selection can be changed by clicking settings from the action bar. Once the new language change is selected, the app will erase all the stored data and restart to download content in the new selected language format.

The technical architecture of the app is shown in the diagram below. 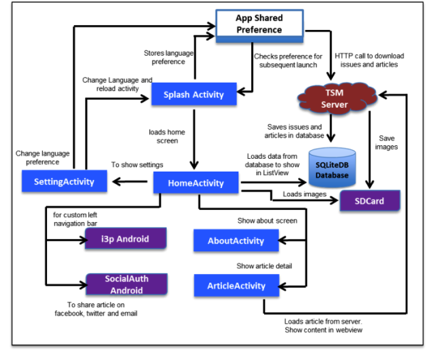 We used the following tools and libraries to build the application over the course of 6 weeks:

The following sections highlight the challenges faced by the team during development and testing. It tells how we identified the problems at hand and what it took to solve the problem.

The TSM home screen showed a list of articles from the selected issue along with author bitmaps. The team found that the images received from the server need to be downsized in order to avoid users an OutOfMemory error, as it resulted in application crashing in some user scenarios.

To effectively handle the OutOfMemory issue, we used bitmap sampling, a process to develop a downsize image from an existing image. The major challenge was to maintain the aspect ratio of the original image, thereby retaining the quality of image during its re-sizing. Presented below is sample code to calculate the image sample size:

Many articles received from the TSM server contain embedded YouTube videos. Playing YouTube videos inside a web view is a very challenging task, because you don’t have controls on web view. Also, the implementation varies on devices for Gingerbread and Ice Cream Sandwich devices. For instance, in Gingerbread devices, the YouTube videos used to run by default on full-screen, whereas in Ice Cream Sandwich and above, device users have to manually enable the full screen.

We considered separate approaches for Gingerbread and ICS devices. For GingerBread, we used the Android default Videoview control, whereas for ICS and above devices we made use of the Java reflection API to seamlessly play the videos. Using the reflection API, we get the reference of HTML5VideoFullScreen$VideoSurfaceView from WebKit and play the full screen video. For both the versions, sample code is pasted below:

Fetching TSM data in an asynchronous manner in the application and then showing the data on the UI was taking 20-25 minutes. This is definitely a large time. To reduce the complexity, a number of different processes were created. Each of them was doing its own task of downloading data from the server. The difficult part in this is the synchronization among them and avoiding any conflict. Author images cannot be downloaded until the Author information is downloaded, for example, as the path of the image is contained in the Author information. Thus, the challenge was to optimize the data downloading time and thereby improve the application’s performance.

We implemented ThreadPoolExecutor to cut down on the response time. All the tasks are attached with the executor. Initially, the thread pool was created with size as 2 allowing two threads to execute in parallel. As soon as these threads finish, the threads from the pool are queued to download the content as the user browses the application.

We selected these devices to cover the major range of Android devices in the market based on our experience. The testing team used the following set of testing methodologies to ensure that the app experience should not break while in use.

If you have made it this far, you should take a minute to download the application on your Android smartphone or tablet. Let us know what you think with a rating in the Play Store or a comment in the comments section below!