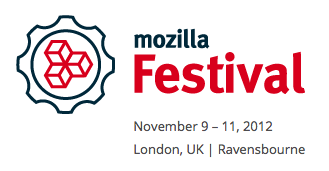 Marcos and Mariano presented a design challenge workshop about finding new relationships' visualizations. The idea was to bring designers, programmers, and journalists together to discuss a new manner of visualizing multiple relationships within stories. The conference attracted people from all over the world with backgrounds that varied widely, bringing a spirited discussion to the section. The group proposed several potential useful applications of data that people would like to see visualized, like:

- Showing natural catastrophies like hurricanes and the ensuing corruption around the recovery money.

- The relationships between big companies' board members and their inter-connected nature.

The audience further explored issues like neuro-linguistic programming and how to extract in a more automatic way formal information from multiple documents and sources.

The Mozilla Festival was a weekend-long collection of presentations and workshops centered around imagining what the web will become. The purpose of the conference was to bring together different branches of the Mozilla community, one of which is Knight-Mozilla OpenNews, to discuss the future of the web. On the Mozilla site, Executive Director Mark Surman sums up the reason for the conference as this: "We want to move people from using the web to making the web."

You can view the presentation Marcos and Mariano gave below. Interested in reading more about the Mozilla Festival? Check out what people had to say about #mozfest on Twitter.