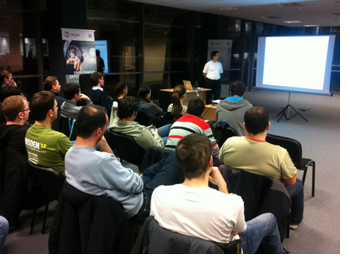 Florin Jurcovici, a Technical Lead who specializes in Java development at 3Pillar, is pictured at left giving his presentation on “Cloud Platforms for Java.” The presentation, which is embedded below, covers the pros and cons of a number of cloud solutions for applications, including Google App Engine, Amazon Web Services, Heroku, Windows Azure, OpenStack, CloudBees, and Jelastic.

Each of these cloud solutions allows companies to rapidly scale web applications, and we have a weatlh of experience providing cloud-based hosting of the software products we develop and support. One example of the internal R&D we are doing in the area is the Bolt framework being created by the 3Pillar Labs team. The Bolt Framework is a Spring container that lets applications connect to services and manage trigger and action sequences via a Java API. Work on the project has yielded a number of reusable components that will be valuable for our software development teams when integrating Spring, Spring Data SimpleDB, and QuartzSimpleDB with AWS.

Speaking of Spring, the other presentation at the Java User Group Meetup came from 3PIllar Java developer Ciprian Mester, also a Technical Lead. His SpringData demo can be accessed on github here.

Catalin (Cata) Stef is the VP Operations of 3Pillar’s Romanian offices. In this role, Cata oversees 3Pillar offices in Cluj-Napoca and Timisoara. Cata has a long history of both founding and growing successful product delivery organizations, starting with Dacomy in 2003, which initially focused on delivering products for local Romanian and European clients. Two years later, LeverPoint sought to acquire the Romanian presence of Devix after hearing of their excellence in delivery. Under the LeverPoint umbrella, Cata grew the size of the Cluj delivery center from 15 to 50 people. The 3Pillar Global acquisition of LeverPoint in December 2009 positioned Cata’s team for even more growth. He extended the good reputation of 3Pillar in Cluj-Napoca and opened the second location in Timisoara. Today, Cata manages over 225 people in Cluj-Napoca and Timisoara combined.