The preponderance of tech companies, software development companies, and venture capitalists in Washington, DC and the Dulles Technology Corridor have long made the area surrounding the nation's capital a hotbed for startup technology companies. It wasn't long ago, in fact, that we ourselves wore the mantle of software development startup. So we were honored to present at last week's inaugural SwitchPitch DC event alongside local heavyweights like LivingSocial, Gannett, Vox Media, and FOX TV.

Given our corporate heritage, we were thrilled to have Chief Growth Officer Bobby Christian put forward an internal HR/Operations management tool that startup companies can bid on helping us optimize. Bobby and the event got some good ink from Elevation DC Media's Whitney Pipkin in an article recapping the day's events.

Mike Goldstein and Steve Case during the SwitchPitch Q&A 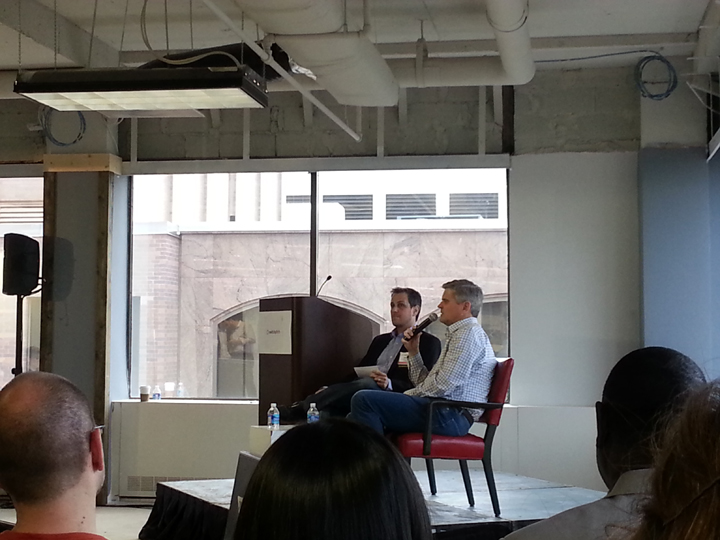 DC Mayor Vince Gray was in attendance and helped kick off the festivities with a keynote that focused on the business benefits startup companies are already bringing to the DC region. Steve Case of AOL and Revolution Ventures fame was also on hand and sat for a Q&A with event organizer Mike Goldstein of Endeavor DC before the presentations began. Case gave advice to startups from his AOL days, which he dubbed a "10 year in the making overnight sensation." Among his advice for startups was not to fall in to the trap of thinking they alone have the answers to all the world's problems. Partnering with other companies was vital to AOL's success, Case said, and given the pace at which new technologies are being unveiled, developing partnerships with outside service providers is a prerequisite for startup success.

Special thanks to Mike Goldstein at Endeavor DC and Sita Vasan at SwitchPitch for including 3Pillar in a fantastic group of presenters. Kudos also to the sponsors for the event, which included Microsoft, LookThink, cVent, Patton Boggs, Merritt Group, and Startup DC. To read more about the event, see additional press coverage in the Washington Business Journal and Biznow.