A World Without Interfaces, with Golden Krishna – The Innovation Engine Podcast 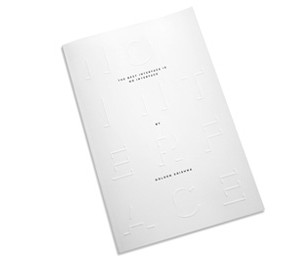 On this week’s episode of The Innovation Engine podcast, we’ll be looking at how to get past our collective obsession with “screen-based thinking.”

Among the topics we talk about are why “There’s an app for that” are the 5 most insidious words in the English language, 3 principles anyone can follow to create products that don’t force us to interact with yet another screen, and why it’s important to establish and understand the difference between User Experience and User Interface.

Golden Krishna, author of the recently released design manifesto The Best Interface is No Interface, joins us to discuss all that and more. Golden’s book is based on an essay he wrote of the same title for Cooper Journal that has garnered more than 200,000 page views. The talk he gave on the subject at SXSW in 2013 was attended by more than 1400 people.

For more than a year Golden has been at Zappos, where he works with small teams in the company’s research and development labs to “build & explore new opportunities to push one of the world’s greatest customer service companies toward new directions that deliver happiness.” Prior to Zappos, Golden served as a Senior Designer at Samsung, where he worked in their innovation lab alongside engineers, industrial designers, and business strategists to create new products and services that could ship within 18-24 months.