Why The Apple Watch Turned Out to Be Very Useful 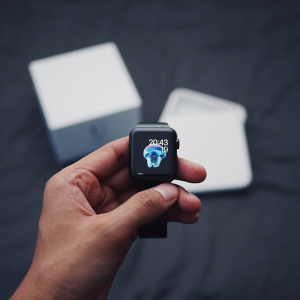 My exposure to, and adoption of, technology over the years has varied greatly. I first learned programming on an Atari 800 (yes, that company used to make personal computers) in 3rd grade, instructing a turtle to move around the screen. At the opposite end of the spectrum is my first car, where dual-zone climate control was achieved by opening the vent on the passenger side; a task done by pulling a little lever by your feet.

But throughout my life, technology has been very comfortable to me, and at any time I always wanted to include it in my life. I had an iPod, cell phone, and PDA, and when the iPhone 3G came out I determined I could finally merge all of these devices into one device, simplifying my life and allowing for more integration of technology into my life. And the approach I took when I purchased the iPhone is really the way that I look at technology: will this change in technology make my life easier?

So when the Apple Watch was released by Apple in early 2015, I did not immediately rush out to get one, even though I did think it was pretty cool. I have a nice analog watch, and I have an iPhone, and so as before I looked at it from the perspective of how can this device make my life easier? While the iPhone 3G consolidated a few pieces of technology, my initial perception was that the watch would just replace one item with another. So, I held off on purchasing an Apple Watch for the time being. One of my coworkers, however, did get one initially, but determined it was not helpful for him. So I asked him if I could borrow it for a few weeks, to try it out and see if I liked it and if it could be a helpful device. As it turns out, it really is helpful for me…I was hooked, and I bought it.

The key to my trial, though, was to really put forth the effort to make it usable, rather than taking an “I’ll just put this on my wrist and see if I like it” approach. With some helpful tips from articles on MacWorld, I spent some time configuring the watch and my phone to make it really work for me. So how did the watch prove to be a helpful companion for me?

I already wear a watch.

This is a big thing, because if you’re not used to having something on your wrist, it could feel a little odd, or you may not always remember to put it on. Over the years, my love for a watch has gone back and forth. In high school it wasn’t necessary, but later on in college it became necessary to make sure I was on time to events, work, etc. After college, it was not as necessary, but again as life progresses more time-based demands entered my life and a watch was helpful.

Beyond acting simply as a timepiece, how has the Apple Watch made my life easier?

The watch should not simply be another source of notifications in addition to the ones I already get from my phone but rather a filter for important vs. unimportant. This is similar to the way that David Allen, author of Getting Things Done, advocates reducing distractions to focus on your current task. For me this meant setting up my VIP contacts (e.g. boss, wife, etc.) for the emails to go through to the watch. If my phone buzzes, not important, but if the watch buzzes it is more important.

There are some things where a quick glance will provide the information I need to determine if additional processing is needed. Text messages and meeting invites are not always urgent, so a quick glance of who is sending the message or the day/time of the invite is all I need and doesn’t require me to pull out my phone. Complications are the other aspect of a quick glance – little bits of information displayed on the clock face. Some days are sprinkled with various meetings at different times, and a quick glance of the next meeting time helps me to plan out my time; and the time travel is a quick way to look ahead without having to pull up the calendar.

Stop taking out my phone.

For me, I don’t keep my phone out all the time, and so it’s a lot easier to glance at my wrist than to take the phone out. This is especially helpful when someone calls to quickly see who it is and determine if I should take the call. I also use Siri’s capability to quickly create reminders, especially with geofencing (e.g. stop by the store when I leave work), and this also works well with the watch so I don’t have to take out the phone. I’ve even used it when my hands were full to send a text message (“Hey Siri…”).

Another big plus for me, because I have an iPhone 5S, which does not have the hardware for Apple Pay. And like above, it means I don’t have to take out my wallet as often, especially since most of my frequent stores accept Apple Pay; not all (I’m looking at you, Target, Home Depot…), but some. I suspect some of the delay relates to the holidays, and retailers not rolling out new hardware/technology during the peak buying season.

Is any one of these items the killer app of the Apple Watch? No. Can any of these be done without the Apple Watch? Sure, but for me it’s the combination of all these little items in one device that together make it very compelling and useful.

For me, the Apple Watch serves a purpose, and is valuable, and will continue to be a part of my life. It reminds me of lead development, in that it is a product that has identified a need and it meets that need; it’s not a broad-based device that everyone needs, nor is it a super niche-focused device. So I expect that we’ll see continued evolution of the device, and probably one large update that will expand its usefulness to a broader set of people.

To me, though, the next thing should not be limited to just what will happen in the next iteration of the Apple Watch, but rather what is next for wearables. Will they gain traction as single-purpose devices integrated into larger garments, or will they take the role of a converged device that could replace multiple devices? That, however, could take a separate article.

Jonathan Hotz is a Senior Product Manager at 3Pillar Global. He is a cross-functional team leader in the organization whose responsibilities include developing a product strategy and vision for clients, creation and maintenance of long-term product roadmaps, guiding the development of functional prototypes, user analysis and interviews, and requirements analysis. Jonathan has over 15 years of experience in the areas of user interface design and product management, covering a variety of products including websites, enterprise and SAAS software, and mobile applications. He approaches product management with a user-centered design philosophy, using analytic problem solving and applying user experience design principles to design and build applications that support and guide the user, all while providing a great experience. He holds a Bachelor of Industrial Design degree from Syracuse University.