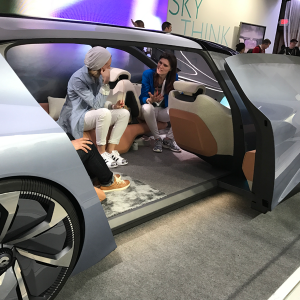 For a very special episode of The Innovation Engine, we’re giving you a look inside the 2017 SXSW festival in Austin, Texas. SXSW celebrates the convergence of the interactive, film, and music industries. SXSW Interactive focuses on emerging technology and has developed a reputation as a breeding ground for new ideas, creative technologies, and product innovation. The festival includes a trade show, speakers, parties, and a startup accelerator.

We took The Innovation Engine on the road to Austin for this episode, where we got the chance to speak with a number of people whose work we found interesting. Subjects include:

Interested in hearing more? Tune in to the full episode of The Innovation Engine via the SoundCloud embed below.

Want to know what it’s really like to be at SXSW? Check out the 360-degree video from our time at the conference via the Vimeo embed below. You’ll get a taste of what the crowds were like in Austin, see what the future of autonomous cars may look like in the form of the Nio Eve (pictured above and in the video thumbnail; think a living room on wheels), and get the chance to walk the floor at the SXSW expo, where you can see and hear about what NASA had on display, among other things. If you’re watching on a desktop, you can click and drag the viewpoint directly within the video embed.

If you have a VR viewer, you can also follow these links to the videos on Vimeo or YouTube to get the full immersive experience. If video quality is lacking on YouTube, be sure you set it to the highest 4K resolution possible.

About The Innovation Engine

Since 2014, 3Pillar has published The Innovation Engine, a podcast that sees a wide range of innovation experts come on to discuss topics that include technology, leadership, and company culture. You can download and subscribe to The Innovation Engine on iTunes or tune in via the podcast’s home on Stitcher Radio or SoundCloud to listen online, via Android or iOS, or on any device supporting a mobile browser. You can also download the podcast’s dedicated iOS app from the iTunes App Store.