Keep it Small, Keep it Fast 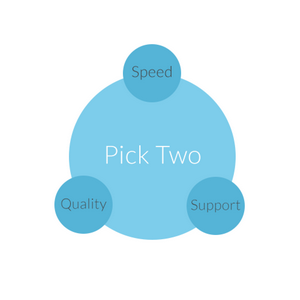 Freelancing and working with small startups throughout the past four years before joining 3Pillar Global forced me to move fast.

Compared to the enterprise level software development projects we take on at 3Pillar, the apps and websites I built were small. For the most part, these projects would take less than a week to design, develop, and test. This isn’t because they were tiny apps; I was simply focused on the important tasks.

When it comes to app or website development, it typically boils down to three focuses and you can only choose two. Our company is used to large projects, so the two focuses we tend to choose are quality and support. This is ideal for larger-scale software development projects and projects for our caliber of clients; however, these focuses don’t work for most small projects because small apps need more speed than support. Remember: never disregard quality. Only focusing on speed and support is a recipe not only for disaster, but also for total client dissatisfaction.

As a project manager, you may be thinking “What? No support?!” but don’t worry. Let me explain what I mean.

Support: The obvious difference between large and small projects is the number of people allocated to the project. When you have a large number of people on a project, it becomes much more difficult to keep everyone in the loop. The number of hours spent on this is huge but necessary for larger teams. Small teams don’t need it because information flows easily within them. In my case, there was no time spent on communication because I took care of all aspects of the projects: design, development, and QA.

There needs to be a clear differentiation in practice for small projects. An example of a high-level approach to small project development should, chronologically, look like this:

Again, as a project manager, you may be thinking “What? Where do I fit in?!” Small projects still need project managers, but I believe their role is support for the team though supervising agile practices and keeping the client happy.

The main goal with small projects is to get the information to the developers as fast as possible, and then let them loose. As long as developers have both the designs and access to the designer for questions, they know what they’re doing on the project. Small apps and websites don’t need to take months to develop. Instead, with the right focuses, you should be able to complete small projects in just a few weeks.

Matt Sich is a Software Engineer at 3Pillar Global. He works on our Seal Team, a small, technology-agnostic team that handles short-term projects with quick turnarounds using mostly one week sprints. His projects usually have heavy use of AngularJS and Java with Spring Frameworks. Before joining the 3Pillar team full-time, Matt interned with us one summer while in college. During the internship, he developed and designed iOS apps. Matt received a B.S. in Computer Science from the Franciscan University of Steubenville.