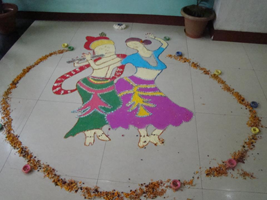 Diwali, one of India’s holiest and brightest Hindu festivals, takes place today. There are numerous reasons Diwali is celebrated, but the main intent remains the same: the victory of light and knowledge over darkness and ignorance.

People decorate their houses with lots of oil lamps, paint the floor with colored sand, and seek blessings from deities to ensure good prevails over evil. For centuries, Indian customs and rituals surrounding this holiday have remained much the same. Traditions like lighting oil lamps and shooting off firecrackers to ward off evil spirits are passed down from generation to generation. The Diwali celebration is one of India’s most sacred traditions, and it marks the beginning of the Indian New Year.

Continuing with the tradition’s festivities, 3Pillar’s India office organized a Diwali Mela (fete) last week in preparation for the upcoming holiday. You can see more pictures here of our team partying well into the night, playing games of lucky seven, hoopla, light the candle, shoot the balloon, and bump the tumbler. The idea of Diwali Mela was to let our employees in India celebrate this jubilant festival with their teammates and to enjoy the spirit of the holiday together. 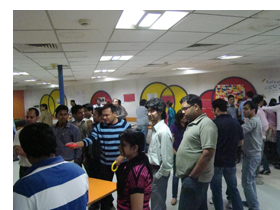 One thing that’s universal at 3Pillar across all our locations is our love of food. The Noida team served up a number of authentic street cuisine dishes, which is always the best way to make 3Pillar employees happy. Bumper prizes were distributed through a raffle, and each ear in the place was attentive as the preceding went on. All together, the 3Pillar India family enjoyed a fun-filled celebration with lots of laughter. Here’s wishing all our employees in India and throughout the world a Happy Diwali and a very Happy New Year!

Prior to 3Pillar, Raj was a founding member and Chief Operating Officer at BrickRed Technologies, which was merged with 3Pillar in August 2011. At BrickRed, he led the organization in various roles, including HR, Engineering, Finance and Operations. Raj started his career as a developer with Tata Consultancy Services and later on worked with EBProvider before founding BrickRed along with 3 more of his college mates.

Raj holds an engineering degree from the Indian Institute of Technology, Delhi.