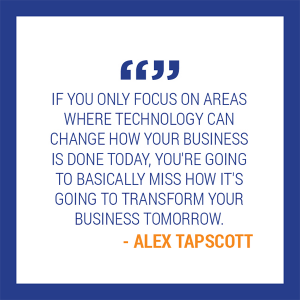 On this week’s Innovation Engine, we’re pleased to welcome Alex Tapscott back to talk about unlocking the blockchain. Among the topics we’ll discuss are how far blockchain technology has come in just a few short years, what your company may be able to learn about organizing teams from a company called Consensus, and why blockchain may represent the “Internet of value.”

Alex last joined the podcast about two years ago, when the book he co-wrote with his father Don had just been published (Blockchain Revolution: How the Technology Behind Bitcoin is Changing Money, Business, and the World). Alex and his father Don also co-founded The Blockchain Research Institute and, in 2014, Alex wrote the seminal report on governing digital currencies for the Global Solutions Network program at the Joseph L. Rotman School of Management at the University of Toronto.

Interested in hearing more? Tune in to the full episode below:

What has changed in the world of blockchain over the last two years?

What does it mean that blockchain is creating the “Internet of Value?”

There’s a chapter in Blockchain Revolution called “Reinventing Financial Services” that talks about how blockchain will alleviate some of the pains that existed in that industry. How can blockchain help fix that?

What value might blockchain offer companies in the near future?

Read up on the blockchain:

If you like this episode of the podcast, please help us spread the word about it using the Click to Tweet button below or the social media icons at the bottom of the post.

How has #blockchain evolved in the past few years alone? @AlexTapscott discusses this and more on the latest Innovation Engine episode. #cryptocurrency Click To Tweet