Entering a World of Virtual Reality, with Mitch Gelman 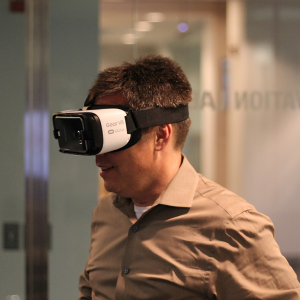 Mitch Gelman joins us for this very special episode of The Innovation Engine podcast to talk about what to expect from the brave new world of virtual reality and the first wave of headsets that are hitting the market. Mitch walks several of us through the virtual reality experience using the HTC Vive and Samsung Gear VR.

Tune in to hear why billions of investment dollars are being poured into VR, why Mark Zuckerberg thinks it represents the next big computing platform, and to hear the reactions of several people going through their first experience with the HTC Vive and watching short clips like The Blu.

Mitch Gelman is a Senior Fellow in Media & Technology at the Newseum. He was previously VP of Product at Gannett, where he oversaw digital product development in key areas for properties that included more than 90 national and local news entities across the USA Today Network. Mitch was the Executive Producer on USA Today’s award-winning Harvest for Change VR series and has won awards including the Pulitzer, the News Innovation Award from the Knight Foundation, and the Best Use of Technology in Journalism from the National Press Foundation. Mitch was one of the co-authors of the Knight Foundation’s recently released whitepaper, Viewing the Future of Virtual Reality in Journalism.

In addition to the usual podcast audio, we also recorded this episode of the podcast in 360-degree spherical video. You can step inside 3Pillar’s Innovation Lab to watch Mitch Gelman and Will Sherlin talk about the future of VR via the YouTube embed below.

If you just want to see what virtual reality looks like (from outside the headset), this 3-minute clip of Andy Zipfel, Tony Orlando, and Michael Lisse experiencing the HTC Vive will give you a little taste of that.

Interested in hearing more? Tune in to the full episode of The Innovation Engine podcast via the Soundcloud embed below.

One Response to “Entering a World of Virtual Reality, with Mitch Gelman”