The Great Mobile Debate: iPhone vs. Android vs. Windows Phone 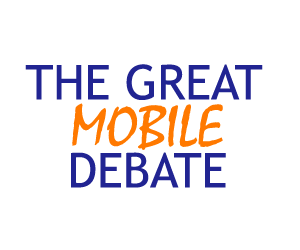 Here at 3Pillar, we spend a lot of time discussing the best ways to design and develop software products like mobile applications, and the best platforms on which to launch those apps. If asked, most 3Pillar employees will happily tell you why they prefer developing for (and carrying around) iPhone, Android, or Windows Phone devices.

This mixed bag of preferences, which resembles the breakdown of device ownership in the general public at large, was the reason we decided to make mobile device platforms the first topic of discussion for the 3Pillar "Great Debate" series. Each debate will focus on hot-button issues of interest to the software development community as a whole.

Special thanks to the gentlemen who were willingly enlisted as guinea pigs for the first installment of the Great Debate series. It stars, in alphabetical order:

Filmed live, this is a rough cut and a first stab at pinning mobile development experts down on the fly. Keep an eye out for future installments of The Great Debate series on topics like Java vs. .NET, Native Apps vs. Mobile Web, and many more.

What else would you like to see us debate? What topics would you want to see discussed? Let us know in the comments section below!