Google TV 101 – An Introduction to App Development for Google TV

If TV shopping is on your agenda, chances are that you must have come across a plethora of ‘Smart TV’ advertisements being aggressively promoted by popular TV brands. This 3-part blog series will attempt to throw some light on this phenomenon especially the popular Google TV from a developer’s perspective.

Let us scratch the surface in depth and start with this question: What is a Smart TV?

Smart TVs, also known as connected TVs, are new generation televisions or set-top boxes that integrate a complete operating system within a television unit and allow it to run advance applications based on specific platforms. They allow viewers to stream a variety of dynamic content such as videos in same way as smartphones and tablets. They provide a platform to application developers to reach billion of TV viewers by developing interactive apps for it.

Taking the Smart TV experience to a new high is Google TV, developed by Google Inc. in collaboration with Sony, Logitech and Intel. First released in October 2010 the product effectively integrates the Google Chrome browser with the Android operating system to deliver a stunning 10 ft. viewing experience with larger fonts and button size.

Google TV is an application developer’s delight; as it is run on a customized version of Android OS, it eliminates the learning curve required to develop Google TV compatible applications.  It also comes with a Google Chrome browser, thereby allowing viewers to browse web sites for video content and watch television.

A study by Digital TV research projects the Smart TV count to touch nearly 600 million worldwide by 2017. Another piece of research indicates that the TV apps and services market will burst from under $4.5 billion in 2012 to an astounding $14 billion by 2017. 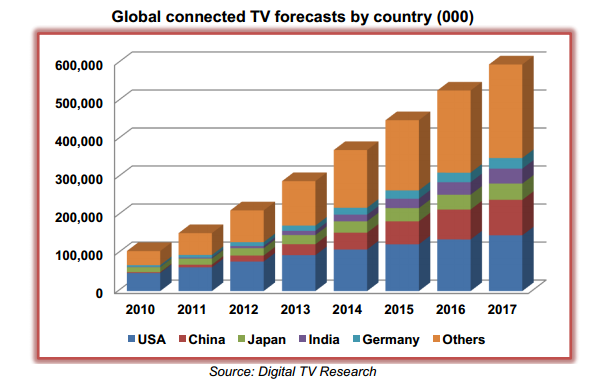 A major chunk of this rise will come from the popularity of Google TV and applications designed specifically for this interface. According to Eric Schmidt, the CEO of Google, “by the summer of 2012, the majority of the televisions you see in stores will have Google TV embedded on it”.

Universal Apps provide full functionality on all devices including Google TV. These apps do not require categories on Google Play. Example of one such app is Panoramio Application.

Google TV specific apps will not work on any other platform except Google TV. Using system feature com.google.android.tv you can filter apps on Google TV devices. One good example here is the Live TV designed for Google TV. The app development is done in the same way as you would develop an Android app but you need to strictly adhere to Google TV UI guidelines and effectively handle large resolution images.

Google TV is a no-touch screen input device and therefore apps are typically controlled using a remote control. Channel listing content provider shows a list of TV channels and Google TV add on, an emulator to debug Google TV apps are some features specific to Google TV only.

Google TV contains the Chrome browser and therefore users can easily access all websites on the Internet. But the websites are not optimized for the Google TV experience so developers must design a “10-feet experience” that looks great and fits Google TV requirements.

User submitted web applications come under the Demo Gallery whereas apps developed by partners will find a mention under Google TV spotlight.

A second screen application act as a controller for a Google TV application and helps users to play with TV app using mobile device. The YouTube Remote application is a good example to demonstrate the capabilities of the Google TV experience. Using the app a user can browse through videos on a smartphone and play a selection directly on the Google TV.

With the rise of software platforms on connected devices, Google TV can face the following challenges:

Coming soon! The second part of this 3-part blog series on Google TV. Through this part I will discuss how to develop a Google TV app using the example of LifeView an application developed by 3PillarLabs and available on Google Play.

Google TV is a new wave of technological evolution and is a medium to penetrate into uncharted markets of TV users. Mobile developers can use this platform to add to their repertoire of existing skills with minimal effort. And finally, it is an excellent business opportunity that will become a major strategy of revenue generation in the coming years.